In 2017-2018 academic years, 87 students of the History Faculty are trained on the state educational grant of the Republic of Kazakhstan. Over the past three years, 15 students have won the Presidential scholarship, 58 students akim’s scholarship of Aktobe region.

Students of the faculty participate in various international and national conferences and competitions. Students of History faculty receive not only professional training, but also actively involved in social activities. The youth Committee of the faculty also holds various Olympiads, KVN, holidays, meetings with interesting people. At the faculty there are various intellectual and discussion clubs, held debates, discussions, intellectual games and round tables. There is a student Dean’s office, the purpose of which is to introduce elements of self-government in the educational process, the organization of cultural and sports work of young people, the promotion of healthy lifestyles, promoting the improvement of the educational process. At faculty student debates and various sports tournaments are regularly held; holidays – “teacher’s Day”, “student’s self-government day “, “Golden autumn”, “Student’s spring”, “Miss of faculty”, “and well-away, boys!”, “Victory day”, “Nauryz” etc. Participation in all spheres of the faculty’s life brings up a sense of responsibility in boys and girls, a sense of participation in what is happening around them, its importance. And as a result, students become not only professionals, but also leaders in life positions. 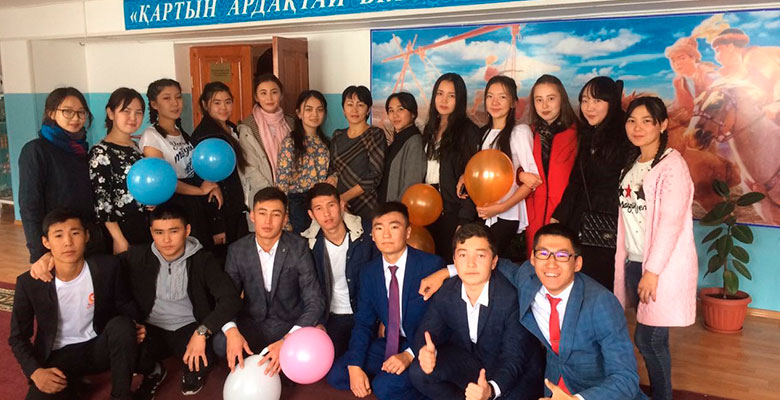 Students of the faculty organized a festive event: “Karttarym – Asyl Kazynam” in a nursing home. 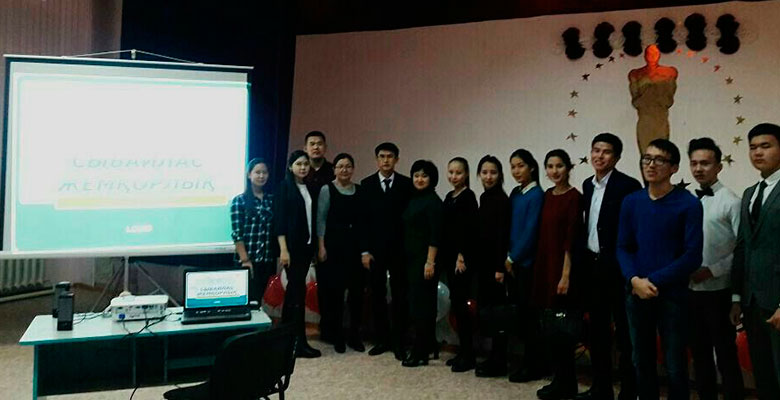 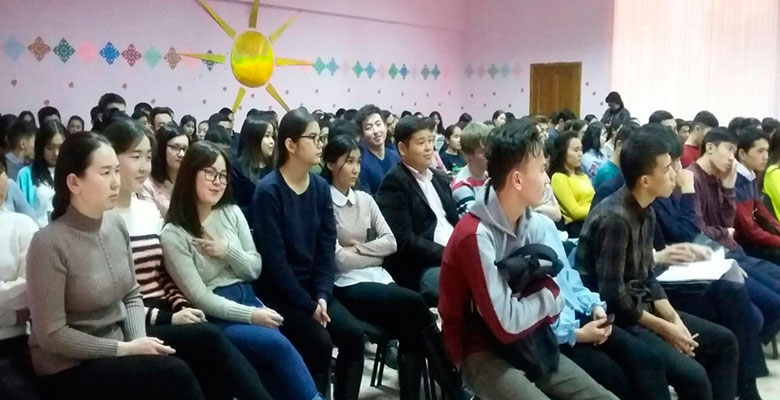 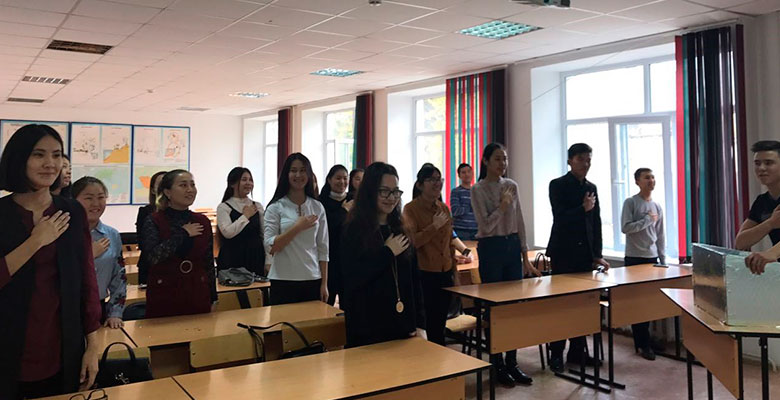 Action in honor of the First President’s Day

Press-stand of the faculty in Latin

Visit to the oblast akim B.M. Saparbayev “House of Students”.

As a result of the mini-football tournament within the framework of the Ruhani zhangiru program, the team of the historical faculty was awarded with the certificates “Best goalkeeper “,” Best defender “,” Best scorer “.

For participation in the contest for the best essay, which took place in the framework of promotion of the Message of President Nursultan Nazarbayev “Kazakhstan үshіnshі zhaңғyruy: zhaһandyқ bәsekege қabіlettіlіk” 3rd year student of the Faculty of History was marked by akim of the city “Letter of Thanks”

Students during  the work of the faculty «English Club»

A ceremonial event on the occasion of the opening on the basis of the historical faculty of the IPC “Qobylandy”.

During the work of  students’ circle is «Historical Local». 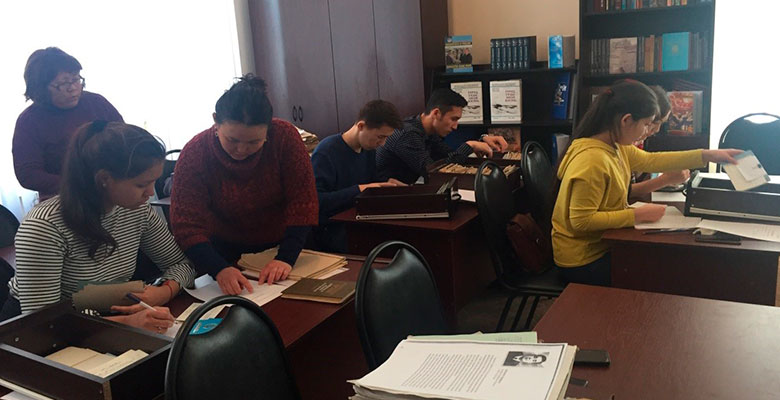 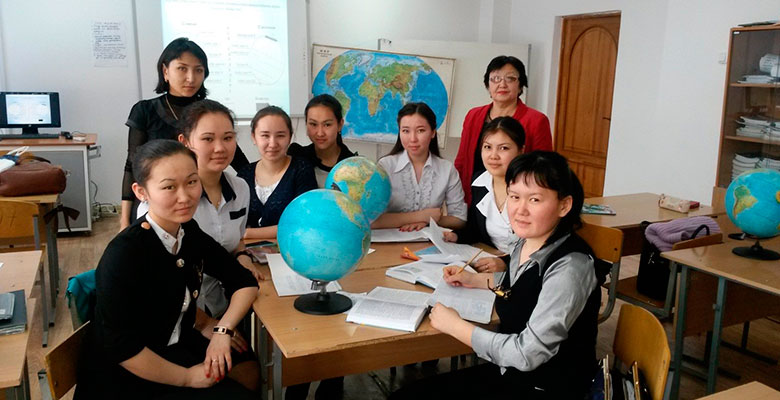 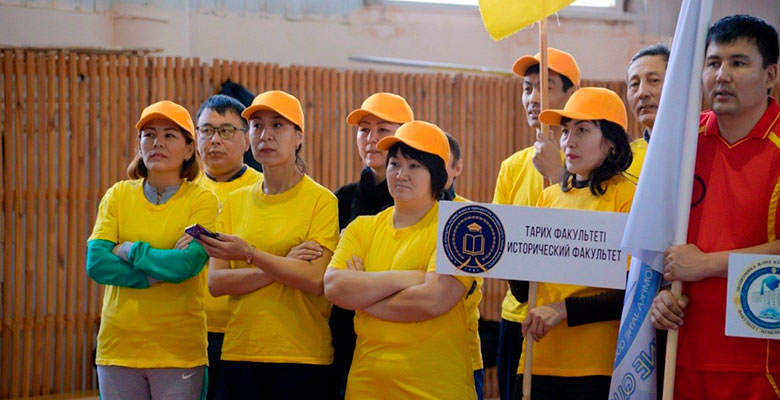 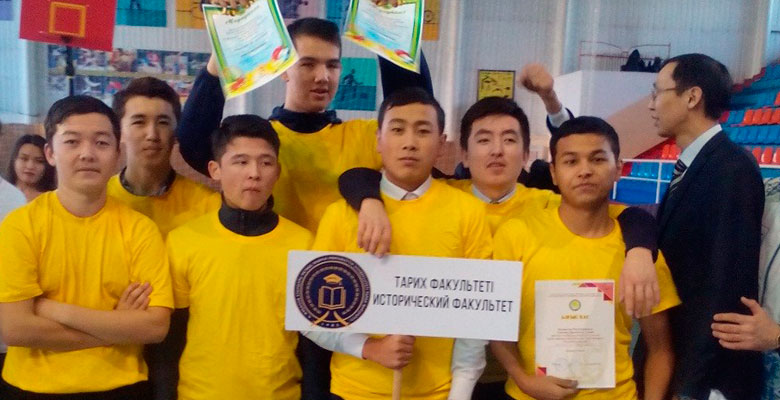 Teachers and students of the faculty during the Sport days. 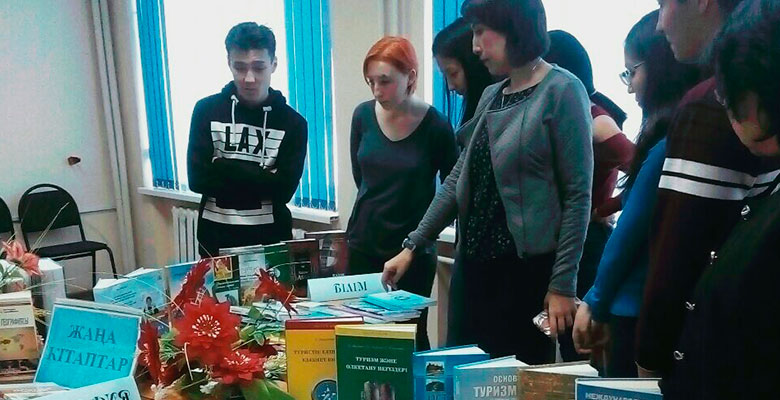 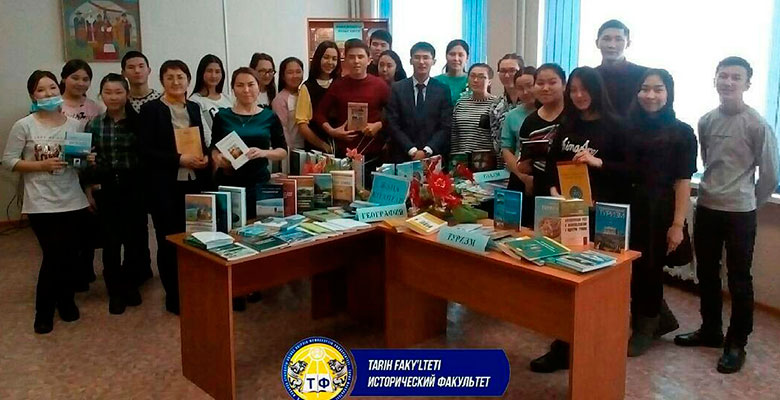 Exhibition of New Books and Textbooks 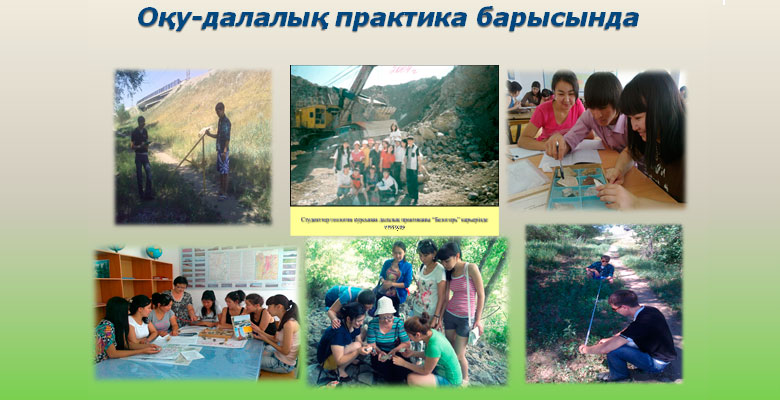 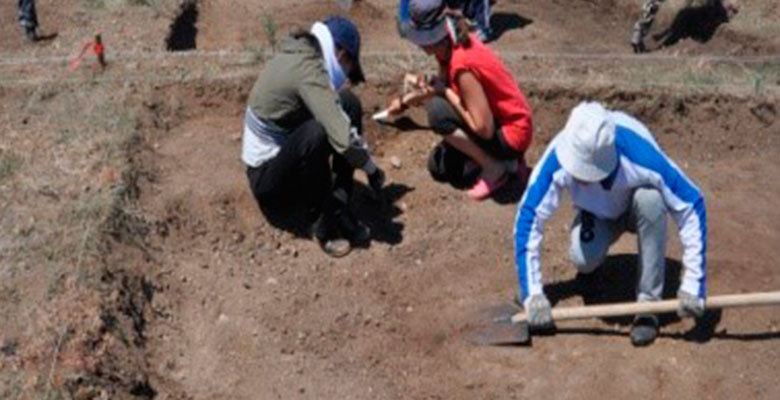 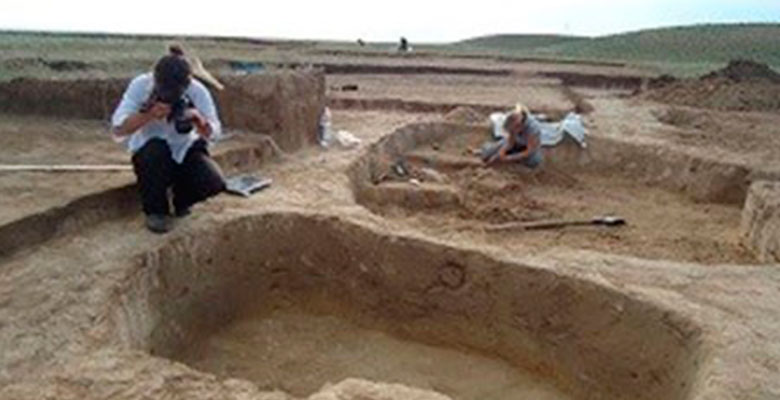 On May 27, 2019, the best students of Aktobe were awarded a scholarship from the Akim.

In April 2019, as part of the Rukhani Zhangyru program, on the 30th anniversary of the withdrawal of Soviet troops from Afghanistan, a round table was held on the “Afghan war: history and fate”.

On April 24-25, a training seminar “The path to the future begins with everyone” was held in the Nursultan city in the Library of the First President, which was attended by a 3rd year student of the specialty “Tourism” – Albekova Asem.

The faculty team received a certificate for active participation in the Ecosystem – Student Entrepreneurship ERG Fair Trackathon project at the Kazakhstan-Russian Youth Forum in Kostanay.

participants in the intellectual game What? Where? When?

The faculty team participated for the first time in the history of the university’s futsal league.

During the excavations, the leaders of which were N.M. Bairov, A.B.Sarbaev, the remains of a man who lived 2.6 thousand years ago were discovered.

According to the plan of archaeological work, students conducted excavations at 3 burial sites in 4 sections.

Students of the faculty of History Aktobe regional state University named after K.Zhubanov met with specialists of the regional center for prevention and control of AIDS. The purpose of this event: to acquaint students with the main problems of modern humanity, including tobacco, alcohol, drugs, AIDS, which became the epidemic of the century, as well as to acquaint them with the main causes of harmful effects on humans. Specialists of the regional center for the prevention and control of AIDS (acquired immunodeficiency syndrome) Artykbaeva Altynay Yesetovna and Zhulmagambetova Sandugash Serikovna told students about how to protect themselves from AIDS. Videos were shown according to the theme. Special preventive, small collections with various reference books and remarks were distributed to students. 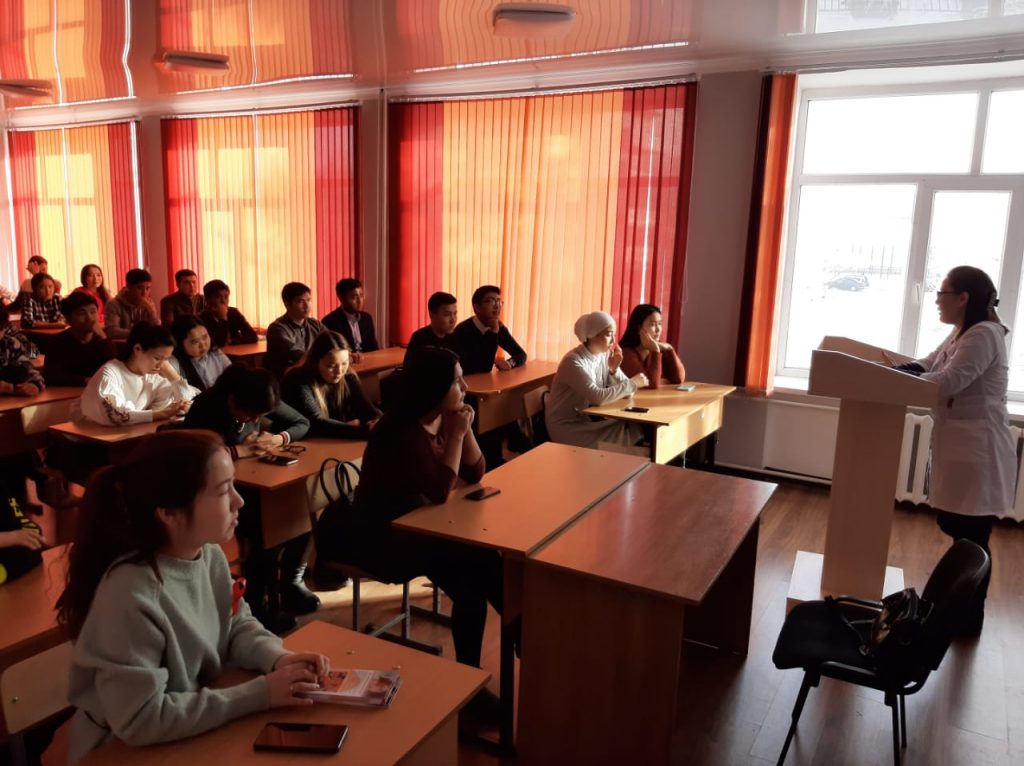 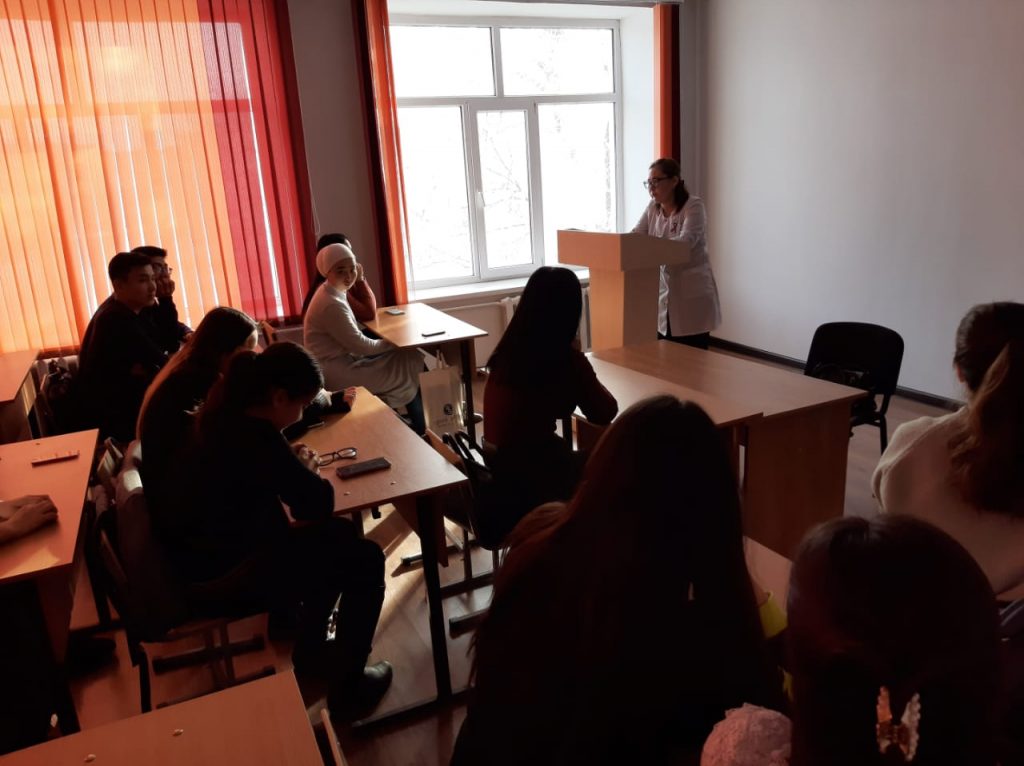 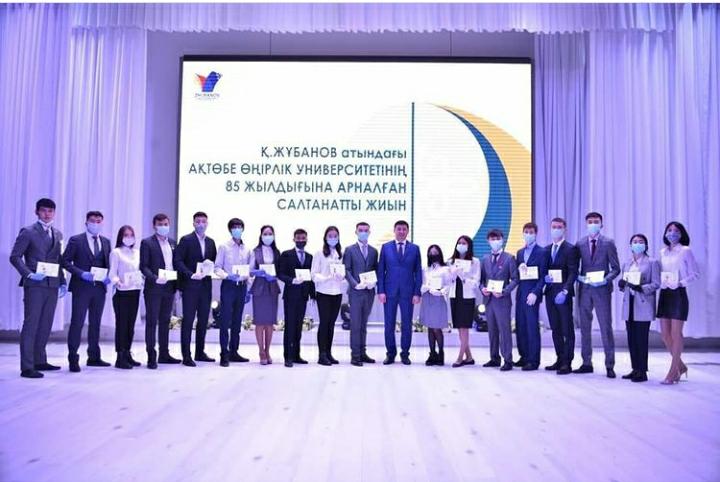 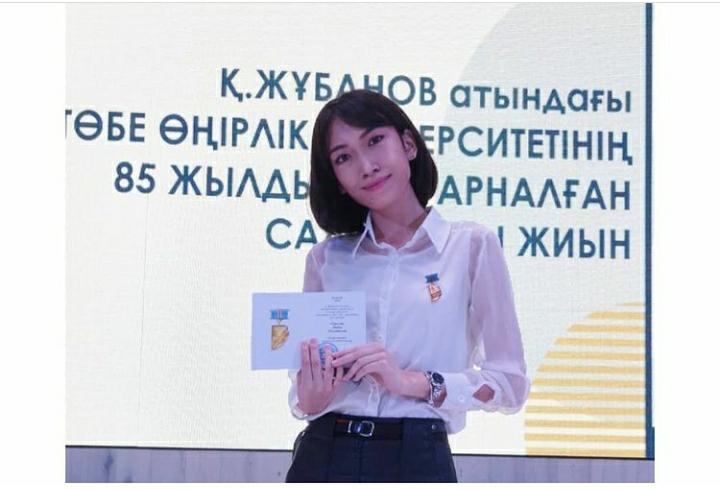 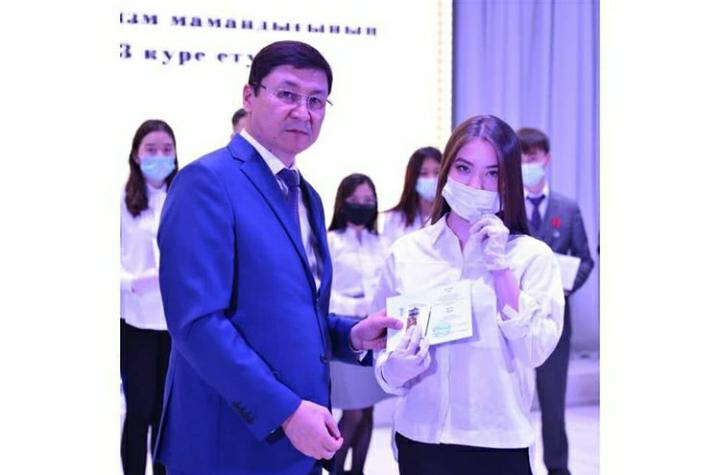 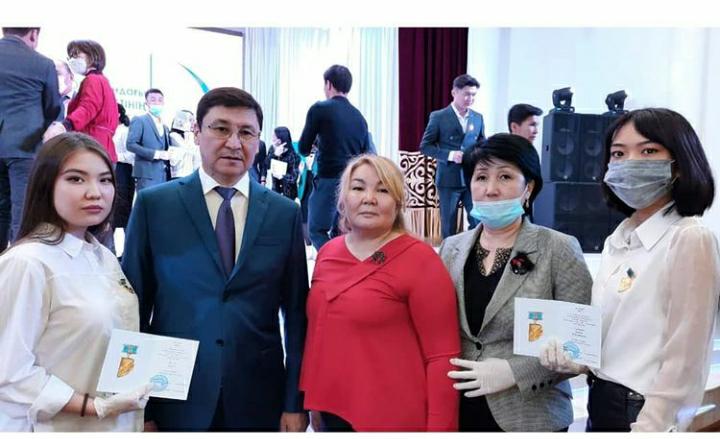 On February 11 of this year, the ICT of the B. Suleimenov academic building was opened.in the Hall, an intellectual game “Brain Ring” was held among students of the 1st year, organized by the senator of the Faculty of history A. A. Amanzhol. The winners of the competition, who competed in knowledge and knowledge, were awarded.

At the festive event organized to award the winners, senior activists of the faculty were invited as guests, and they were presented with letters of thanks. 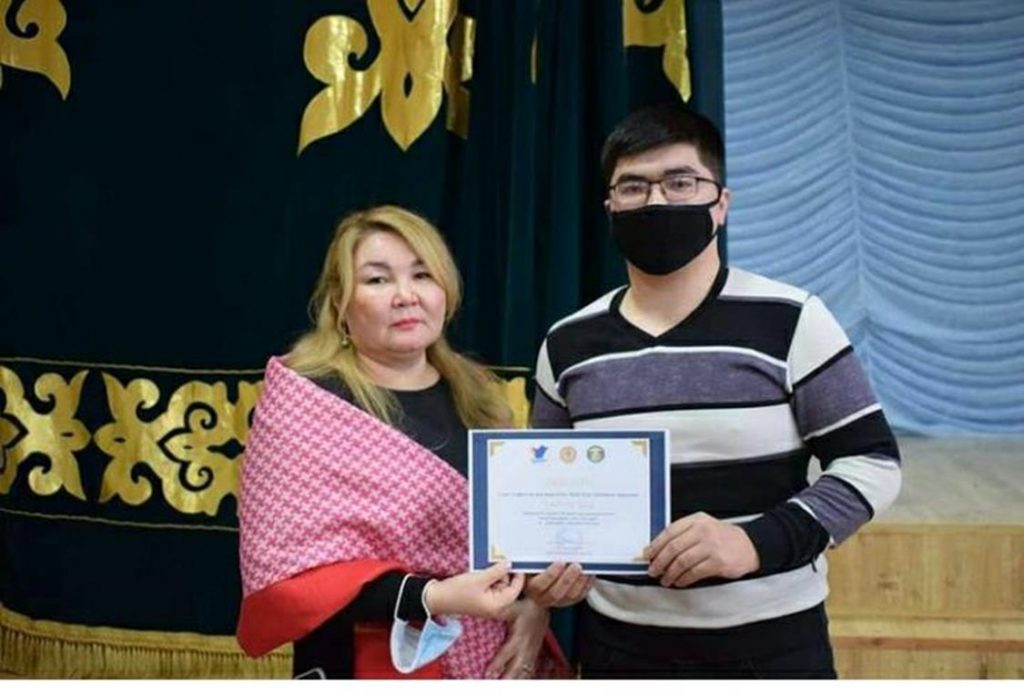 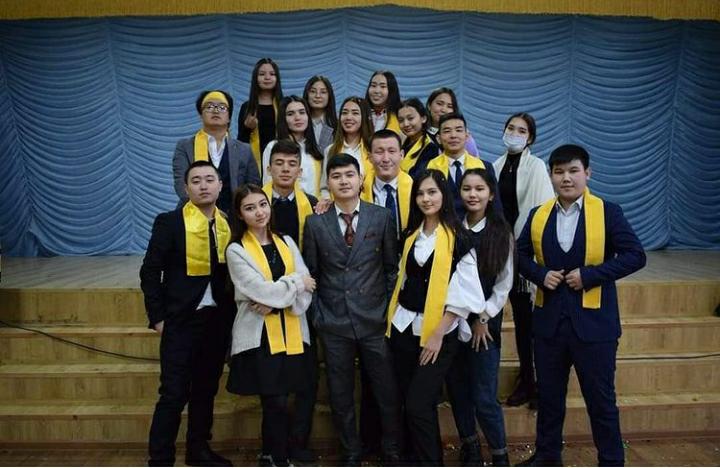 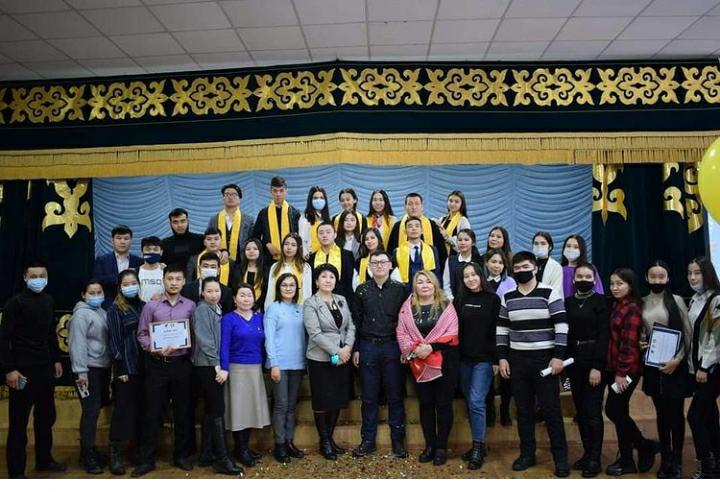 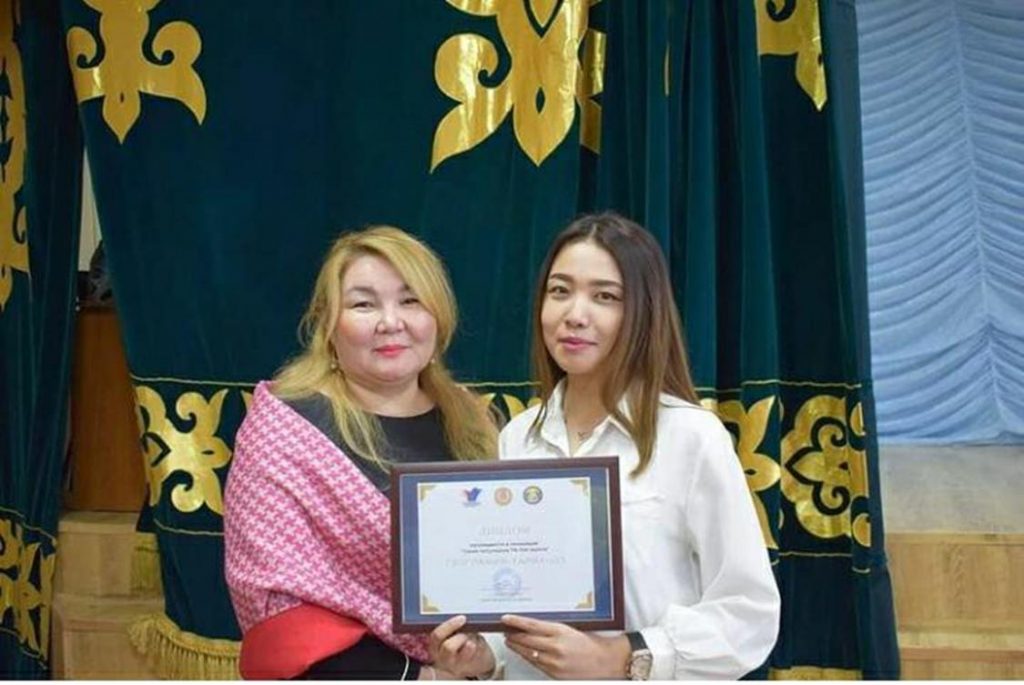 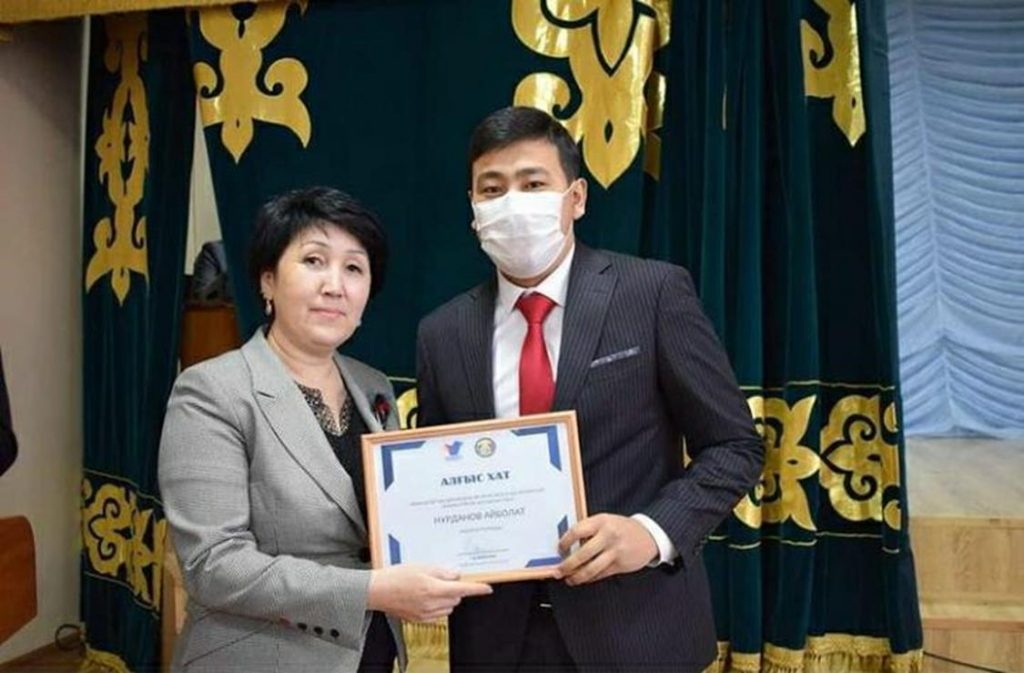 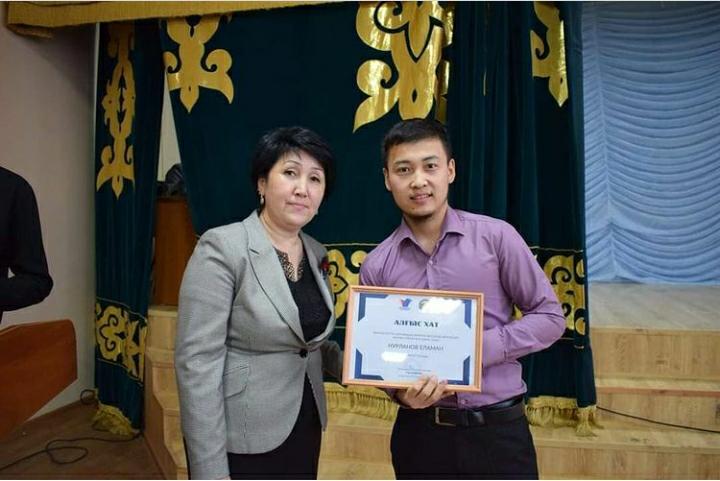 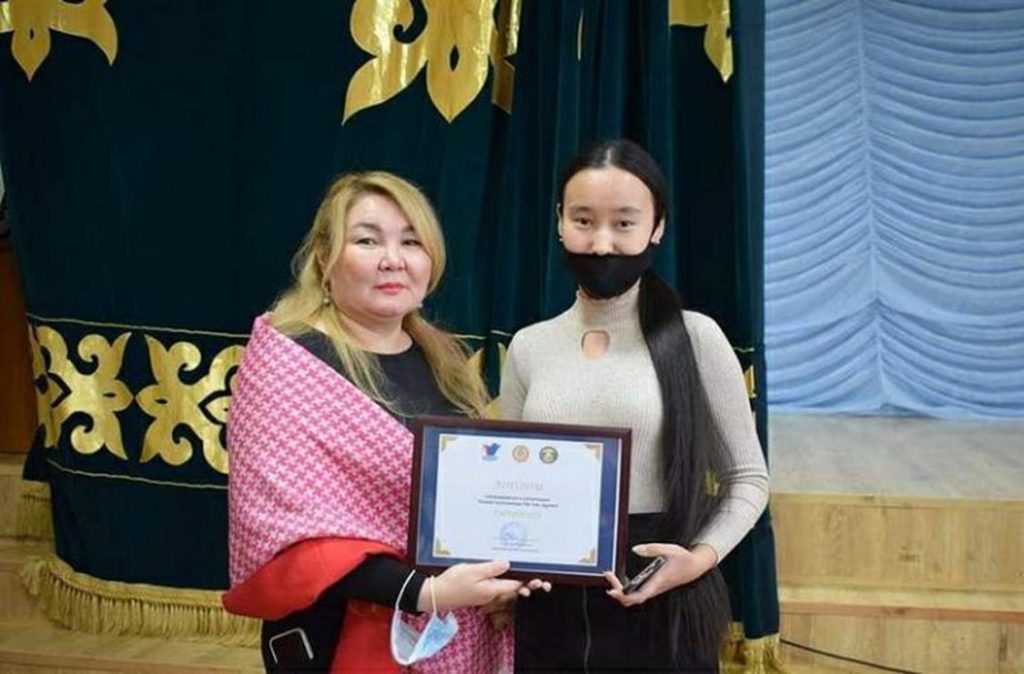 Congratulations to the students of the Faculty of history, who won prizes in the inter-faculty competition within the framework of the festival “youth format”, organized in honor of the International Students ‘ Day on November 7. Amanzholov Asanali, Aitpay Olzhas – I place in the competition” Battle of kinomanov”; Zhumabekova Tulipak, Kuanysh Anel (geography – history – 103), Isaeva Zarina (Tourism – 104)-III place in the game” team building”; Ivan Oralsyn, Onkalbayev Amankos, Turganbayev Akzhol (History – 101) – III place in the intellectual game” brain-ring”. We are grateful to the students of the 1st Year, who, despite the distance learning, defended the honor of the faculty and took an active part in various competitions at the University. We say that the future is in the hands of demanding young people who have the same aspirations as you. 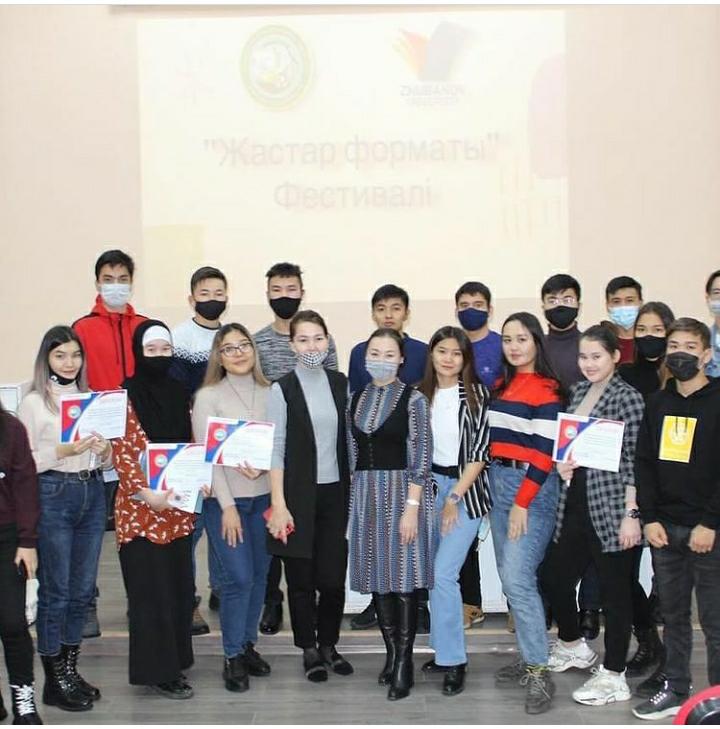 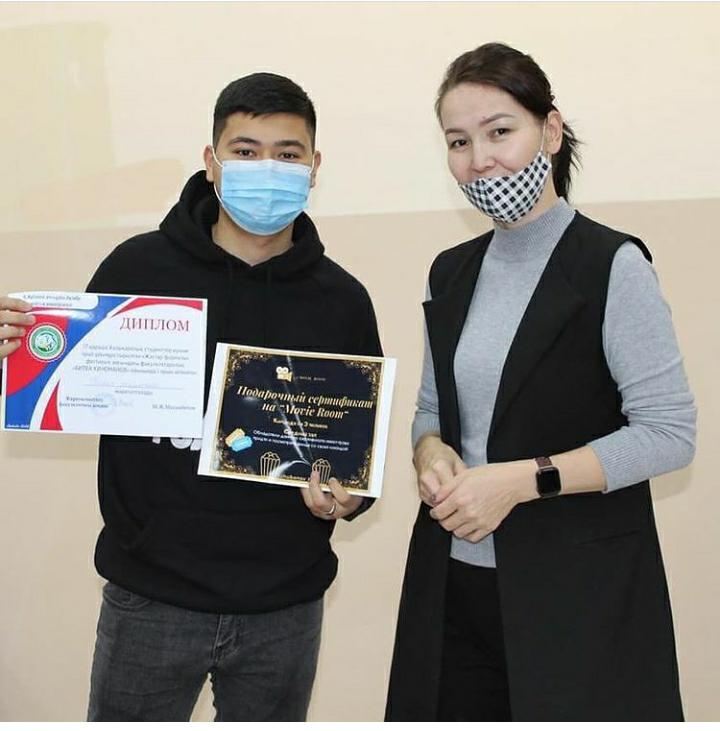 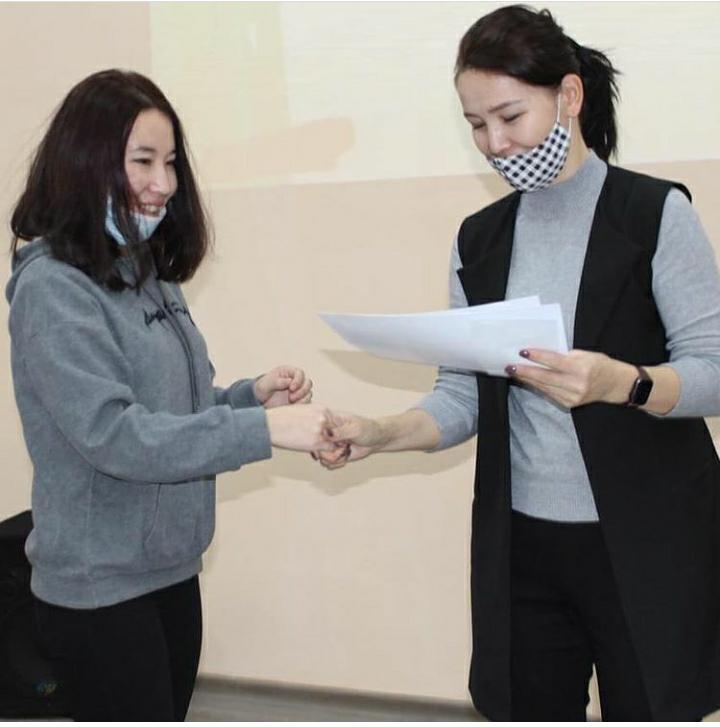 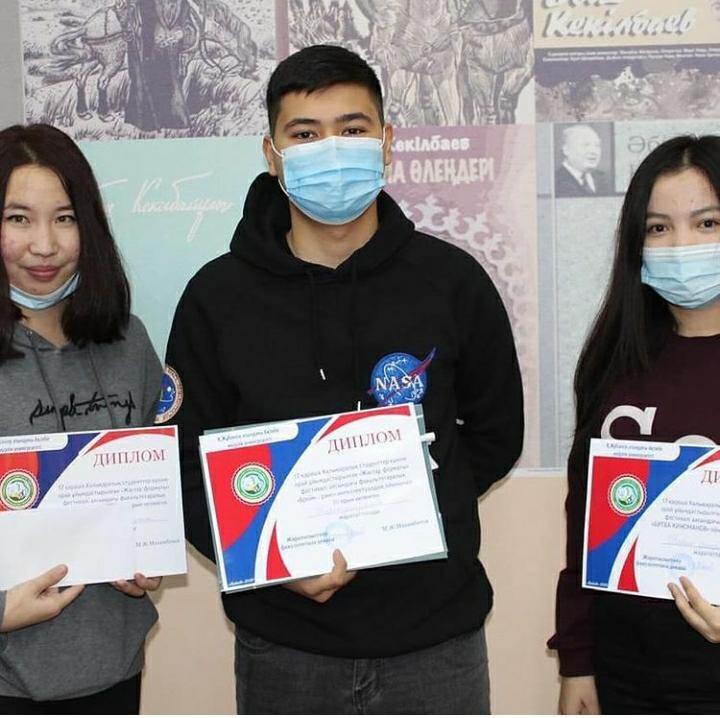